Friends, You may or may not be known, Here is a collection of 25 Most Interesting Computer Facts about funny Computer & Internet facts. Just have a look, & you will sure get surprised 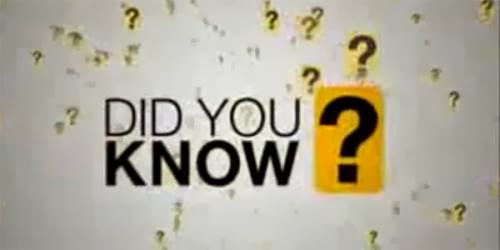 The surprising facts
1. Another name for a Microsoft Windows tutorial is ‘Crash Course’!
2. Bill Gates house was designed using a Macintosh computer.
3. 80% of all pictures on the internet are of naked women
4. By the year 2012 there will be approximately 17 billion devices connected to the Internet.
5. Domain names are being registered at a rate of more than one million names every month.
6. E-mail has been around longer than the World Wide Web.
7. For every ‘normal’ webpage, there are five porn pages.
8. In the 1980s, an IBM computer wasn’t considered 100% compatible unless it could run Microsoft Flight Simulator.
9. MySpace reports over 110 million registered users. Were it a country, it would be the tenth largest, just behind Mexico.
10. One of every 8 married couples in the US last year met online.
11. The average 21 year old has spent 5,000 hours playing video games, has exchanged 250,000 e-mails, instant and text messages and has spent 10,000 hours on the mobile phone.
12. The average computer user blinks 7 times a minute, less than half the normal rate of 20.
13. The first banner advertising was used in 1994.

14. The first computer mouse was invented by Doug Engelbart in around 1964 and was made of wood.
15. The first domain name ever registered was Symbolics.com.
16. The world’s first computer, called the Z1, was invented by Konrad Zuse in 1936. His next invention, the Z2 was finished in 1939 and was the first fully functioning electro-mechanical computer.
17. There are approximately 1,319,872,109 people on the Internet.
18. There are approximately 1.06 billion instant messaging accounts worldwide.
19. While it took the radio 38 years, and the television a short 13 years, it took the World Wide Web only 4 years to reach 50 million users.
20.70% of virus writers work under contract for organized crime syndicates.
21. A program named “Rother J” was the first computer virus to come into sight “in the wild” — that is, outside the single computer or lab where it was created.
22.The worst MS-DOS virus ever, Michelangelo (1991) attacked the boot sector of your hard drive and any floppy drive inserted into the computer, which caused the virus to spread rapidly.
23.A virus can not appear on your computer all by iself. You have to get it by sharing infected files or diskettes, or by downloading infected files from the Internet.
24. Country with the highest percentage of net users is Sweden (75%).
25. The first popular web browser was called Mosaic and was released in 1993.